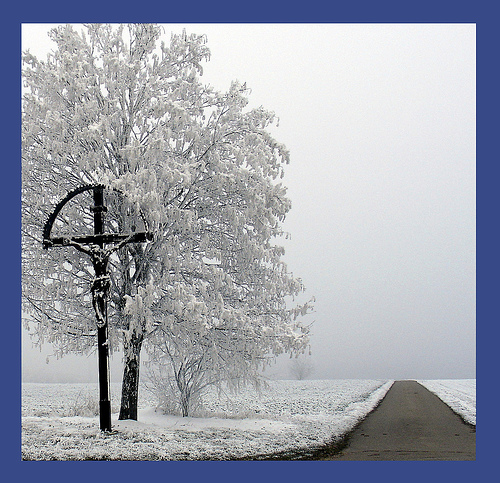 And now, Ladies and Gentlemen, a side of me few know…

In July of 1988, I was living with two paramedics on a small patch of farmland close to the school where I was beginning my teaching career. I had just finished my first year and, only one month into the summer, found that I was suddenly lost; it had been the first time in my adult life that I had had any time at all to just relax and reflect. I had spent my entire life going to school, working, performing in shows, and spending time with friends. In that first year of teaching, it seemed like every moment of my life was spent working on newspaper or yearbook projects, drama productions, or prepping for English classes. I had successfully kept my life as busy as it had always been.

Until that June, when classes ended and I had no plans for the summer.

Something had happened to me when I stopped running. Suddenly, I found myself struggling in ways far beyond my understanding. Who was I? When I removed all of the *things* that kept me busy, what was left that defined me?

I had no answers.

In the days of solitude that followed in that month of June, the deep hollowness continued to worsen; it chilled my soul and made me question my existence, my purpose. it made little difference that I was living on the shores of the Chesapeake. Fairhaven Cliffs, nearly 20 million years old, served as a sanctuary in so many ways. But these times were brief respites from my hectic days and nights. They weren’t during the long stretches of time that I suddenly had.

In all ways imagined, I was terrified to learn that I had never stopped long enough to question and ponder my own existence.

It had rained hard the entire first weekend of July, and I was at my lowest point. Even writing wasn’t helping, as I didn’t have the knowledge or experience to guide me through my troubles. I felt as if I were a car stuck in the mud; I understood that these four wheels could free me, but spinning them continuously was doing nothing but making matters worse. As my depression deepened, I stepped harder on the gas, only sinking further into the muck.

That Sunday evening, July 3, the rain continued. I was alone in the big white house when, Tim, who had grown up there, burst in through the side door, radiating with an energy that I had never seen. In every way he beamed with life: his voice, his walk, even in his stance in that large kitchen.

I couldn’t help but ask what had happened to him over the weekend, especially in this horrible weather.

“I have been to the greatest event in my life,” he had said (or something very close to it). “I went to this barn revival in the rain with hundreds of Christians all around me, celebrating Life and Christ and everything else.”

I instinctively shuddered when he mentioned Christ. I had never let religion be an active part of my life. That would have meant turning over control, something I had never been too interested in doing.

He continued. “But last night. Last night was unbelievable. We were in the barn, and the music played on as the thunder and lightning crashed all around us. One of the most spiritual and magical moments of my life.”

Tim beamed as he poured some juice and continued to tell me all about the revival, especially the music. I was suddenly aware of the extreme differences in the energy each of us was radiating. I was spent, depleted, empty; Tim was filled with life, love, spirit.

I realized, at that moment in that kitchen, that life was not about filling up every moment of your life with “stuff” to keep you busy. Those activities did not feed the soul, the spirit, the heart of who you are, no matter how good those activities might be or what the intentions are.

In other words, if you don’t fill the well with love and with a spiritual understanding, you’re going to find yourself exactly where I was that weekend — alone, thirsty for something I did not understand, and unable to tap into the strength of a spirituality that was inside of me all along. I had stayed in all weekend, sheltered from the driving rains, whereas Tim had spent those same days outside, in celebration, and drenched in the downpour of God’s love.

Three days later, a friend of Tim’s came over, and we had a spiritual rebirth that I will never forget. While Kevin played beautiful music on the guitar and sang, I started poring over passages in Corinthians that started to fill me with a love I had never experienced. Since that evening, I have understood the power of spirituality in my life.

Now, the road has not been easy. I have studied other religions, have delved into Buddhist teachings and studied the Tao Te Ching, but I have never abandoned that belief in a greater being, a God so powerful that I know, through Him, all things are possible.

Amy Grant has been the cornerstone of that faith. Her music has made me realize that I don’t have to be perfect; all I have to be is what God wants me to be.

Amy Grant singing “Agnus Dei” blends that day in July 1988 with who I am today: lost but found, scared but reassured. She reminds me that being spiritual doesn’t make my life perfect; it makes me embrace my imperfect life with love and adoration for all things immaterial.

May you find the spirit in your heart during these blessed days…and for always.