In what seemed like the fastest trip ever to Ocean City (and yet, the longest and “most boringest” ride to my son, Braeden), we finally made it back to Ocean City, MD for our much-anticipated week at the beach.

Last year, when my family and I spent a week in July here, my children deemed it “the best vacation ever,” and Amy and I hardly disagreed. We have all been looking forward to this trip since last year’s vacation ended, and our first night in Ocean City did not disappoint.

After picking up Holland at the gym around 3:45 (she had just returned from a 4-day vacation of her own at Smith Mountain Lake near Lynchburg, VA), we made some last-minute stops for favorite foods and headed toward the Bay Bridge. Despite a little congestion at the bridge because of a lane closure, we made record time in getting to the beach, just before sunset.

Now, I’ve been watching the moon charts closely this past week, and I knew that we were going to be close to watching a full moonrise over the ocean. The last time I experienced anything like this was back in the very early ’90s, when I saw the moon rise over the Chesapeake in Calvert County. I was left breathless by the intensity and the size of the moon, as if the Earth had somehow invited Mars to join her for a late snack. There she was, the full moon absorbing the sun’s orange-red reflection, rising over the water.

I nearly missed it this year. After all of my planning and wishful thinking to get a good moonrise photo, I took some shots of the boardwalk and turned to head south toward the Inlet, when Madelyn said, “What’s the sun rising now for?” I looked back over the ocean and, at first, didn’t see a thing but a lifeguard stand on its side and a sign warning beachgoers about safety along the shore. I took a step to the left and there it was, hiding behind the sign: The Full Moon emerging out of the water as if Zeus himself was rescuing the orb, an Aquarian feat of both strength and love.

Behind us, others along the walk were beginning to notice as well. It was as if we were all witnessing something magical. A few minutes later, as I started to pack up my gear and finally head down to the Inlet, where we planned to meet Brad and his family, I saw a couple walking along the beach, pointing at the rising moon, and then pausing. My kids groaned as I unpacked my camera for a few more shots. I was lucky to get this one, where two lovers celebrated the moment in an especially romantic way:

After I had taken another 10 shots or so, I packed up my gear again (this made my family very happy) and asked for their patience one more time as I ran down to the shoreline to show the anonymous couple the picture. They were thrilled, and I gave them my Ravenwater card and offered them a free copy if they emailed me.

When I returned to the boardwalk, terribly out of breath from running (ha ha ha), I thought my family was going to have a photo intervention with me — just within the first hour of being at the ocean! I promised no more delays, and we headed south for the 1.2 mile walk to the Inlet.

We met Brad and his family while standing in line for our traditional Thrasher’s Fries fix and then spent the next two hours on the boardwalk talking, while our teens strolled ahead and our younger children played in the sand.

One of the things that I love so much about Ocean City is the mystical, carnival-like atmosphere, especially in the evening. The full moon enriched the experience even more, and I was taken aback by the mixture of brilliant, flashing lights from the boardwalk rides with the enormous moon, sifting through clouds sporadically passing by. It was a night to remember in all ways, and we are all grateful for the kindness of our friends, both here and back home, who made this vacation possible. 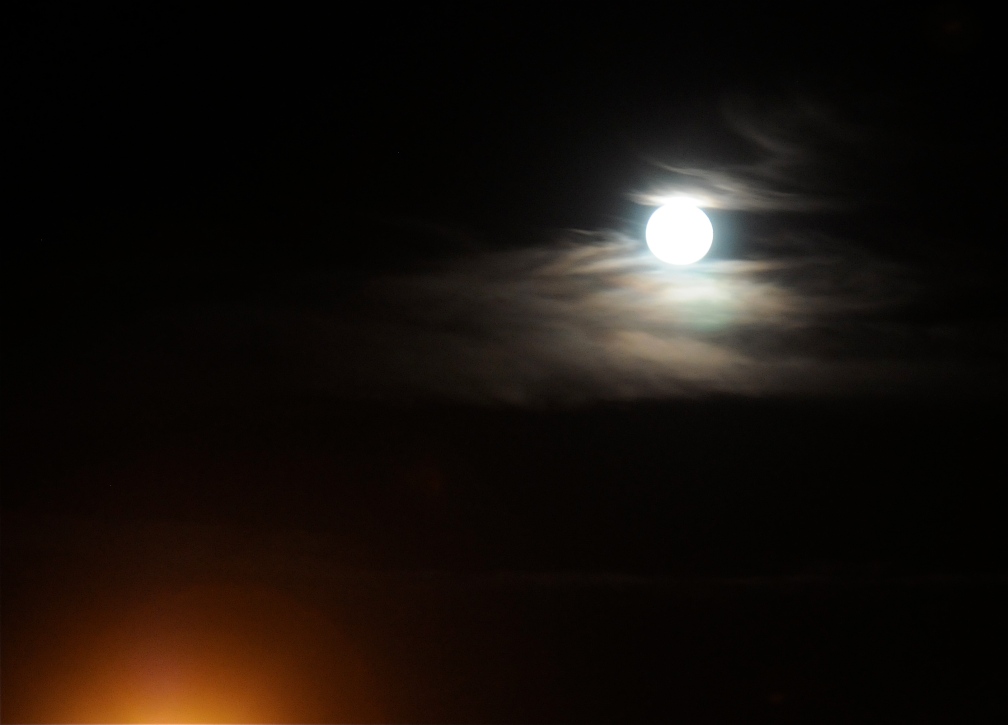 We finally caught the tram back to 14th street around 12:30 a.m. and got the kids to bed by 1:30. Amy and I celebrated the end of our first night in Ocean City with a clink of our Blue Moon and Hoegaarden beers, looking ever-forward to what may come Day 2.