The magnitude of this storm continues to overwhelm me. The images are staggering, but my heart breaks when I see what is happening to our Ocean City. The two pictures below, one released by the OC Tourism Bureau (top) and the other shared by my friend Derek Leek, are of the Ocean City Fishing Pier (or what is left of it). For a long time, it served as the icon of downtown Ocean City, and every time we’ve visited with our children, we always managed to make it to “The Pier.” 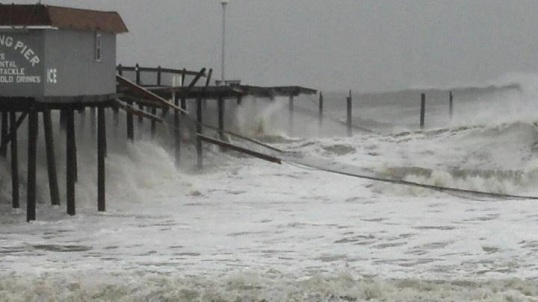 My friend Kim Zimmerman shared the picture below, taken earlier this morning in Ocean City. I cannot even begin to imagine what this area looks like now.

There’s little left to say, except that we’re in for a dark 24 hours. I’ve included some updated information below regarding power outages and school closings, but at this point, we all need to take care of our families, friends, and loved ones (including pets) and stay safe.

From Update #7: 6:22 a.m. – We still have power, as does nearly every other family in Central Maryland. BGE is reporting less than 500 outages, but we all know that we are still in the “calm before the storm” phase of this monster weather event. It is unsettling to hear leaders in New York City calling this storm “the worst that has ever hit New York,” and now that Sandy has made that critical left turn toward the coast, nearly everybody’s worst-case scenario is imminent. At this time, the storm — still hundreds of miles from shore — is tracking to hit the Delaware Bay head on, and areas south and north of this point will experience unprecedented storm surge with sustained and crippling winds of 40 mph with gusts up to 70 mph. Sandy is still a category 1 hurricane with sustained winds now at 85 mph (10 mph higher than what was reported at 5 a.m.), and after it collides with the front that is stationed in Virginia, it will morph into a post-hurricane, monster Nor’Easter. The latest air pressure measurement is at a very low 946 mb (millibars), which is equal to a category 3/4 hurricane that, in this case, will affect 60 million people because it is so widespread. This means that record storm surges of 8-12 feet will not be concentrated just where the eye of the storm makes landfall; shorelines from Virginia to New England will experience the force of this historic storm.

Ocean City, MD continues to get slammed with high tides this morning; this evening will be worse with another high tide and a full-moon pulling that tide even further inland; It is unbelievable that the storm is still hundreds of miles off shore; yet, they are already experiencing damaging strong winds with hurricane-force gusts.

The Weather Channel provides a thorough, state-by-state analysis of what each area can expect in the next two days.

Here are just a few of the changes and preparations being made as Sandy heads toward us:

WAMU 88.5 FM is reporting that the National Hurricane Center believes Sandy could be the worst storm to ever hit the east coast. You can read the full article here.

The Baltimore Sun is reporting that the National Weather Service believes every creek, stream, and river in Baltimore City and Baltimore County will be “out of its banks.” You can read the full article here.

IF TRAFFIC LIGHTS ARE OUT AT AN INTERSECTION: It is now state law that, if a traffic light is out at an intersection, you MUST treat it like a four-way stop intersection. NO DIRECTION HAS THE RIGHT-OF-WAY. Stop, take your turn, and proceed with caution. Violators can/will be fined $90 and assessed two points. For complete information about this new law, which just went into effect October 1, 2012, go here.

We are now as prepared as we can be; there’s little more to do but hold on and hope for the best over the next 48 hours.

(Information gathered from The Weather Channel, The National Weather Service, and The National Hurricane Center) It is rough out there now. The winds are definitely picking up, but they pulse in these scary bouts, driving the rain into our windows with such force. We are also watching the trees in our back yard do a very, scary dance. I never knew they were that flexible… 😦

The storm has now turned toward the coastline, heading directly toward Delaware/New Jersey shores. The winds continue to increase (90-mph sustained winds, now threatening to peak at 100 mph). Expected landfall is later this afternoon.

From that point, the forecast won’t change for the next 18 hours until mid-day Tuesday, when the winds begin to subside and the rain begins to lose a little of its intensity. The temperatures will be falling gradually into the mid- to low 40s.

The storm is also expected to stall over the Mason-Dixon line, west of northern Carroll County. That means more rain, more wind, and a longer period of time before BGE can begin to work on restoring power.

After that, who knows? It is not out of the realm of possibility that non-accumulating snows could creep east and wrap things up for us late Tuesday into Wednesday morning (Garrett County continues to be under a blizzard warning through Tuesday night).

The bottom line is this: Whatever Sandy throws at us, it is going to be historic. The power of this storm is greater than Katrina, Andrew, and every other storm to hit the United States.

I cannot state this enough: The potential for loss of life is too great to imagine, and we must all do everything possible to ensure the safety of our family members, our neighbors, and ourselves.

This will be my last update for awhile, as we will be savoring the time left with power as a family, engaged in a mega-Harry Potter Movie Marathon. If we lose power, Amy and I will be using Facebook and Twitter to keep in touch with everyone.

The following watches and warnings are currently in effect (National Weather Service):

The truth is, though, there are just too many to list. You can get the latest warnings and alerts specifically for your area from the National Weather Service here.

The following school systems and universities are CLOSED on Tuesday (as of 12:30 p.m.):

If your school system has not yet announced plans to close tomorrow, I assume they will soon. It seems unconscionable that any school could open when the state and so many counties are under States of Emergency.

Keep your phones charged and remember to stay in touch with loved ones at all times, especially during the height of the storm tomorrow.

You can get school closing updates from WBALTV.com, if you aren’t connected to any text-alert system for your your school or university.

The Bay Bridge will be closed indefinitely when wind speeds become too dangerous, per Gov. O’Malley.

Worcester County has ordered the evacuation of all beach-front residents.

The following locations are already evacuated:

Ocean City, MD has evacuated from 17th Street to the Inlet. You can read the full evacuation notice here.

Delaware beaches have been evacuated, but some of the evacuation routes are already closed because of breaches in the sand dunes. You can read the full update here.

Havre de Grace residents should have evacuated. You can read the full update here.

The threat of power outages will continue to increase as the storm moves into our area, primarily for three reasons:

This is just one of the many reasons why the MVA is urging drivers to stay off Maryland roads during this storm. There is great unpredictability in where or when trees might come down, and whether they will be bringing power lines down with them. Downed wires do NOT need to be sparking to be live and deadly. Take no chances if you see downed wires in the road or in your yard.

You can check for power outage updates here; BGE does a great job of keeping these numbers updated every 15 minutes or so.

The following reminders, offered by Hubbard, were published in the Towson Patch:

Baltimore County officials will provide updates from Twitter at @BACOemergency.

You can read my piece, “Preparations Without The Panic,” Published in the Towson Patch here.

WBAL 1090 AM and wbal.com
Baltimoresun.com The Baltimore Sun announced late Sunday that they were removing the premium digital block from their website through the duration of this storm. This means that everyone has free and full access to their site for important updates and for sharing information.