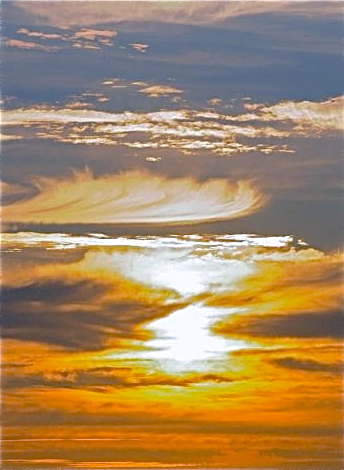 Are You there? Lately I have been wondering, as a few things have happened around our world that makes me question what’s really going on.

Well, I guess it is a combination of things. I mean, bad stuff happens all the time. No real change there. The change is in us, and the way that we are living our lives.

It’s really beginning to concern me.

I remember when I was in fifth grade, our teacher took us to the library to pick out a book (or two) for the winter break. I was an avid reader by that time, and I was going through the books we had pretty fast. Most of the nonfiction titles were about sharks or ghosts, and I had already devoured them. When it came to fiction, though, I read anything I could find. I walked over to the “New Arrival” shelf, and I found a book that I had never heard of before. It came at a time when I was curious about all things related to God and spirituality. I distinctly remember thinking that this book was there, for me, at that exact time.

I took the book to the librarian to check it out. She read the title, then put the book behind her on a separate shelf. She looked at me with disappointment.

I looked at her incredulously. I had never heard of such a thing.

“What do you mean? I’m in fifth grade! I thought we could check out any book here.”

“You can,” she responded. “But not this one. It’s not appropriate for boys.” She waited for me to leave, but I just stood there. I was an ornery kid.

“Why isn’t it appropriate?” I asked.

All she could do was get angry at my persistence. “It just is! Find another book. Look around you. We have plenty of other titles that you will like.”

I left the librarian, and the copy of Are You There God? It’s Me, Margaret, by Judy Blume, remained on the back shelf and out of my reach.

Later that day, I found out from a girl friend of mine that the book had stuff in it about bras and menstruation, and I immediately decided that I had heard enough and would be happy to find another book before we left for the break, even if that meant rereading about sharks and ghosts.

I admit, though, I was pretty bummed. I thought that the book was about God, that it was there for me, on that shelf, for a reason. And that librarian? She could have recognized why I was interested in the book in the first place. A little redirection to the God shelf would have been pretty appreciated.

I’m wondering how many fifth graders today are wondering about God and looking for answers. I know that, if I am now, at the age of 48, then others must be as well.

So, God, instead of going to my local library (where, by the way, I can now read any book I want without being questioned because it’s all self-serve when it comes to checking books out), I thought I’d come directly to You today.

I want to tell You why I am so confused right now. It’s not about these tragedies that are happening around the globe and, terrifyingly enough, right here in the States. Like I said before, I get that (I don’t like it, but I get it).

I am confused because I feel like I know too much. I have read too much about the history of religion, and I question the validity and the motivation of our historians to capture certain religious events. Even more specifically, I question the timing and the similarities between the development of Christianity in relation to other religions.

Or should I not get too hung up on all that stuff? Should the hows and the whys regarding the past not matter to us in the present?

To be honest, God, If it were a purely historical thing, then I don’t even think I would have the need to write you. Wam, Bam, Thank you for the facts, Ma’am. And I’d be on my way.

(Probably not too appropriate here in this context, God. Sorry ’bout that.)

Anyway, this is why I am hung up on this.

I feel Your presence. I feel Your love. In all things. I listen to the holiday songs, and I feel You. I see the icons of Christmas, and I don’t see dollar signs or material goods; instead, I feel You.

When I don’t think about all the things that I have read, and when I stop comparing it to how historical or significant events are archived today with so much bias and subjectivity, where seemingly unrelated agendas govern the accuracy of actual events, everything is different.

But I do think about them, and that’s the problem. I’m finding it so hard to follow my feelings when my head is telling me something so different. It’s just so hard to let go of all of that thought stuff and just believe.

Isn’t that how it worked before we had all this stuff written down? Why did it have to get so political about who wrote what, and how?

Earlier today, I asked a few friends about how they knew You existed, and the answers that I got were right in line with us believers having a personal relationship with You that transcends the written word.

Believe me, God. As a writer, it’s very hard to acknowledge that anything should transcend words. But when we write, we are just trying to understand, aren’t we? To put things in a relative context that makes us understand something a little better? In this case, I think it has done just the opposite.

Anyway, here’s what they said.

Mark offered a quote from a band called, Live: “I don’t need no one to tell me about heaven. – I look at my daughter, and I believe. I don’t need no proof when it comes to God and truth, I can see the sunset, and I perceive.”

That’s pretty clear to me, God. You exist in all things, now and forever. Check.

Natalie went deeper with her thoughts, bringing to light in a strong reminder that Nature offers proof that something greater than us exists. “Why does something greater than ourselves (nature) have to be attributed to a deity? I believe there is a higher power than mere humans, but I think nature in all her glory is more than enough to believe in. That way, I can remove judgment and feeling from the equation and just accept what is.”

I couldn’t agree more that the spirit of the higher power existed long before we could write anything about it. It existed, and we as humans reacted to it in the best way we knew how.

Bernadette: “Something inside a belief, a feeling and yes faith. Who or what created all this? Even scientifically speaking, all this energy starts and ends where and why … I know in my darkest hours that my faith and God carried me through it. I don’t believe in “my god” or “your god” over Allah or any other named [deity]. I believe in one God who does not discriminate; he/she loves everyone “as is”; the rules I find to be man made and not God driven at all. The God I know is for all people, all of the time. Even the nonbelievers.”

Again, we are back to the origins being before any written documentation. Beautiful, Bernadette.

Adam: “The quest to understand ourselves as spiritual beings requires belief in a spiritual realm, one which explains the origins of the universe, the world and of us as individuals, and our relationship with the creator. My belief comes from an understanding that we are spiritual beings, created by a spiritual deity. This is the framework through which I see the world. I understand maths and science as manifestations of the creative language of a creative God.

photo: one of my favorite students!

Each culture has its sacred texts, including atheists, to explain origins and meaning. The opening chapters of Genesis do not explain how the world came into being, but explains why it came into being, because God wanted relationship with the creation. And the resultant Bible is the history of that relationship.

How do I know God exists? I know the relationship I have with him and the communion with the saints. I have seen, and heard, many physical miracles of healing; have heard prophecy and words of knowledge, which, like a scientific theory, must be weighed carefully and proved.

The natural world is therefore a reflection of a creative God, a sign to direct me to the one who made it. I see it and know it most when I see people enacting the commandment to ‘love thy neighbour.'”

God, isn’t Adam awesome? (whoa– If there are no coincidences, I’m pretty excited here about mentioning God and Adam in the same sentence, and knowing you both). When he says that the natural world is a reflection of a creative God, it makes perfect sense to me.

I don’t need the words as much as I need to connection with the natural world, the communion with all that transcends us as humans. And yet, as Adam says so eloquently, we can also see You through the kindness of others.

Katie couldn’t agree more with what Adam shares: “Grace, any moment of someone else sticking their neck out for you or lending a hand, especially when we don’t deserve it, to me is a reflection of the original, ultimate example of this kindness. It’s something that even in today’s world, none of us have time for, goes against ‘every man for himself’ survival instincts, and yet its still everywhere.”

Deborah sees you, God, in everything around her: “You need only to look around to know that God does indeed exist. He is there in all of nature, in the falling of the leaves off the trees in autumn, and in the budding of leaves in spring. When you truly look around and realize what nature has to do in order to complete this cycle each and every year, than you know that a higher being is in charge.”

Jim, ever succinct, agrees as well: “The balance of chemicals in your blood stream, the Natural Order of the Universe, the Beauty of Nature – all evidence to me.”

So God, I guess writing does help us get closer to you in some ways. When my friend Lisa wrote, “That’s why it’s called ‘faith’; I just know,” it’s probably one of the simplest, yet most convincing statements I’ve read in a long time. Tonight, writing helped me understand more of what I believe, and why. As well, my friends’ writing put to shame my concerns that you might not be there anymore. Through their words, I feel Your love. And that’s probably the greatest way to receive Your love, through the kindness of others.

Thanks for all You do (this is getting awkward).

(p.s.: I think I might write an “Are You There God?” book for boys. All of this might have been a little simpler if that had been on the “New Arrival” shelf all those years ago.)

6 comments on “An Open Letter To God: Are You There?”