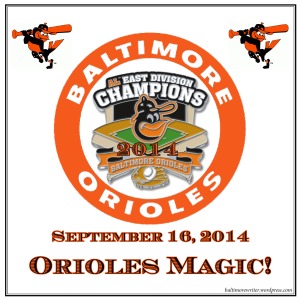 Congratulations on making it to the 2014 playoffs and beginning the series with two dramatic and convincing wins over the Tigers! There are a few things I want to share with you that you probably don’t know. How can you, though? More than half of you were not even born when the Orioles last won the World Series in 1983. I was 18 years old then, and already a seasoned fan since 1970 – when I became a believer in you – The Orioles – for life.

Thanks for keeping us, your fans, with you during this whole glorious ride. When you told the world in 2012 that one of your biggest goals of the season was to bring a playoff game to your fans in Baltimore, you made us believe again in the magic that you made so special to us, so many years ago. And now, in 2014, you continue to connect with us and play championship-caliber baseball while staying connected with the Baltimore fans. You just seem to get it. This is about something bigger than beating the Tigers to advance to the ALCS. You’ve found a way to tap into your youngest fans who want to be just like you, while still resonating with the older folks like me. We’ve been unconditional fans since we were those little kids listening to Chuck Thompson, Bill O’Donnell, Tom Marr, and Jon Miller call the games on the radio.

Here’s how September and October baseball happened every night when I was a kid. We would take extra time on our homework as an excuse to stay up, just so we could hear Chuck, Bill, and the others tell us how cold the beer really was when you would win that night’s game. And for those late showdowns on the west coast? We would sneak the AM radio up to our room, tuck the little white ear bud out of sight, and fall asleep to the sounds of Flanagan’s fast ball popping loudly in Dempsey’s mitt.

Those were great memories, and they’ve never left us. They were just waiting for players like all of you to wake them up, bring them back to life, and make us all feel like kids once again.

Yesterday afternoon, as I listened to Game 2 of the American League Divisional Series with Joe Angel and Fred Manfra delivering each pitch, each hit to us over the radio, I found myself back at Memorial Stadium on 33rd Street, sitting next to my dad in the lower reserved seats (third base side), shouting “CHARGE!” at the top of our lungs as Rex Barney announced Eddie or Cal when they would come up to the plate.

You see, that guy sitting next to me in those stands had taught me something pretty important that has stuck with me all these years. No matter how good, or how bad, we might be at the things we love, we can never give up on them, or on ourselves. We just have to keep giving it our best, and good things will come, eventually.

We never gave up on you. You are our team, and we are so grateful for reigniting those memories and that belief in you that has been with us all these years.

Rex Barney, at the end of each of his announcements, always ended with a drawn-out “THANK YOUUUUUUU” that somehow served as the thread that sewed Orioles Baseball into our hearts forever. Your unimaginable, and now unforgettable run into the postseason has taken those threads from the ‘70’s and ‘80’s and has stitched a brand new ball of hope, memories, and faith for all of your fans. It’s an ageless thing, and like I said before: you get that.

And so, O’s of 2014, we tip our caps and offer you a resounding Thank Youuuuuuu for bringing back to Baltimore the magic of baseball and the rekindling of a love affair that had been dormant for a long, long time. Best of luck in your continued quest to be World Series champions, and know that you’ve got a city behind you no matter what that final score might be.

Just keep giving it your best. We’re not going anywhere. We are Orioles Fans, after all. And in this town, that means something.