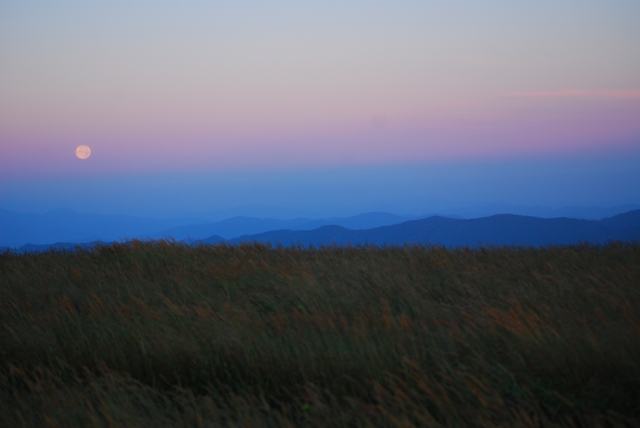 The night is still too much with me as I cross the final gate on this fire road and continue another quarter-mile to the trail head. The moon – one rise shy of being the second full (blue) moon in July – is still the sky’s main attraction. It hangs heavy over the pines and oaks that tower to my left, as the sky to my right continues to blend with brighter pastel hues of purple, red, and orange.

I sweep the hand-held light to my left and my right as I walk briskly, scanning for scat, or tracks, or fresh-picked berries. All I find are the boot prints of another walker, and I follow the large steps as I listen for the sounds of pushed brush, a flurry of beating wings, or even a heavy exhale of a well-rested bear.

What-If I hear any of these sounds, though? What then? My mind runs movies of dropping to the ground, rolling into a fetal position and playing dead. The bear sniffs and snorts around my face as I hold my breath. He nudges me with his nose, paws at my lifeless arm, even tugs at my sack with his teeth stained blue with morning fruit.

I walk on. Laugh at the fear that loses its grip on me. The What-Ifs turn to So-Whats as I break from the pattern of another walker’s gait, step into the dew-laden grasses that brush the tips of my boots, and follow the old road as it bends to the left and wraps around Big Bald.

I listen to the beat of my own soles on the soft land for another tenth of a mile, until I find the worn path that bears the moniker all hikers welcome: the white blaze of the Appalachian Trail. To my right, the blazes mark the clear path to the top of Little Bald. It is lined with black-eyed susans, Queen Anne’s lace, and yellow coneflowers that capture the pre-dawn colors that brighten the east.

I stand at this crossroad where the path intersects the road and consider skipping the hike through the brush to Big Bald and keeping with the simpler path to the peak of its runt cousin to the right. The view there would be nearly as beautiful, the mountain range nearly as deep, the experience nearly as meaningful.

But you don’t push away the fear of bears and hike in the woods to forego the tallest peak in this part of the mountain range. You don’t battle the What-Ifs and carry your sister’s smile to settle for some safe meadow, where you watch the magnificence of the rising sun with the moon-shadowed mountain behind you, reminding you the entire time that you took the road more traveled, that in the end, you decided that finishing what you started wasn’t that important, after all.

I turn to my left and look at the wooden steps that lead up and into the dark woods. A single white blaze, shrouded in the heavy brush of a mountain laurel bush, tells me this is the other way.

The way I am meant to go.

I look over my right shoulder and see the wind whipping the fragile flowers, where oranges, yellows, and whites sway with sweeping unison across the field. Without giving it another thought, I turn, take a step on the first embedded notch in the earth, and disappear into the dark, abandoning fear and finding faith in pushing through toward the pinnacle of this deeply personal journey.

Next… Part 3. The Summit and The Elements

During the last week of July, we were fortunate enough to join my sister and her family at their mountain cabin in western North Carolina. It was the first time that our family had been together in six years, and the first time I had seen my sister since she lost her left leg in her battle with osteosarcoma.

In the pre-dawn hours of July 30, I wrestled with the decision to hike to the summit of Big Bald Mountain along the Appalachian Trail and see the sun rise over the Great Smoky Mountains along the North Carolina-Tennessee border. I have selected 16 photos from that day, spanning a 14-hour period of light, where I remained focused on the energy of the Sun, the Earth, and the Moon. Mingling among these 16 pictures are six short passages that chronicle my thoughts during that day. This is the second of those six passages in the series called, “14 Hours In Light.”

Read Part 1. The Decision and The Approach

4 comments on “14 Hours in Light: Part 2. The Ascent and The Fear of Wildlife”