For writers, the balance between writing and publishing is a fickle act where mind games play as big a role as anything else.

For me, I just published my largest work to date, Fossil Five, a 436-page novel that was crafted over a period of 5 years and 10 months. I should be on top of the world with delight, and to a large extent – I am.

But I took a detour this morning to the bottom of my blog, which I started in 2005, nearly a full year before the social media site Facebook went public in late September 2006. In my earliest entries, and leading up to when I started working on my book in 2013, my published posts evolved into rather authentic pieces that engaged a small but consistent group of readers.

After that, my entries fell flat and were sporadic at best. My energies had flowed to a different kind of writing: the novel. It’s not that I really regret any of it; what I have done, however, is recognize a greater need for balance in my writing life. I’m happy that my novel is out, but I’m unhappy that my online writing suffered as a result.

I’ve been publishing elsewhere recently, so it’s not like I have been slacking in that area. And my daybooking has flourished in recent years. So why am I so upset about the lack of blogging I’ve been doing?

The better we get at this thing called writing, the better we should get at adding – not replacing – the venues where we share our work, and how, and with whom. If we were gymnasts, would it be okay if we swapped out a forward walkover when we mastered the back handspring? Of course not. We improve as athletes, or writers, when we learn how to add skills and opportunities to be better at what we do.

We can not replace one for the other, especially now when the demands are greater than ever to publish as frequently as possible for an ever-craving readership that demands fresh material be in the wings and ready to be consumed as soon as the work du jour is completed.

I don’t think it’s being too harsh on ourselves, either. We need to be able to balance the writing we do behind the scenes with what we publish, and we need to do more – not less – of both.

Yes, there is a certain urgency as we get older to leave a trace, to share what we know and don’t know, to ponder what we have and have not experienced, and to offer a perspective of what we have learned, and what we still need to learn.

I am reminded of the grandfather in Jonathan Safran Foer’s postmodern novel, Extremely Loud and Incredibly Close, where he is so afraid of not being able to say everything in a letter. The author illustrates this tragically by having the words and letters bunch up at the bottom of the page. 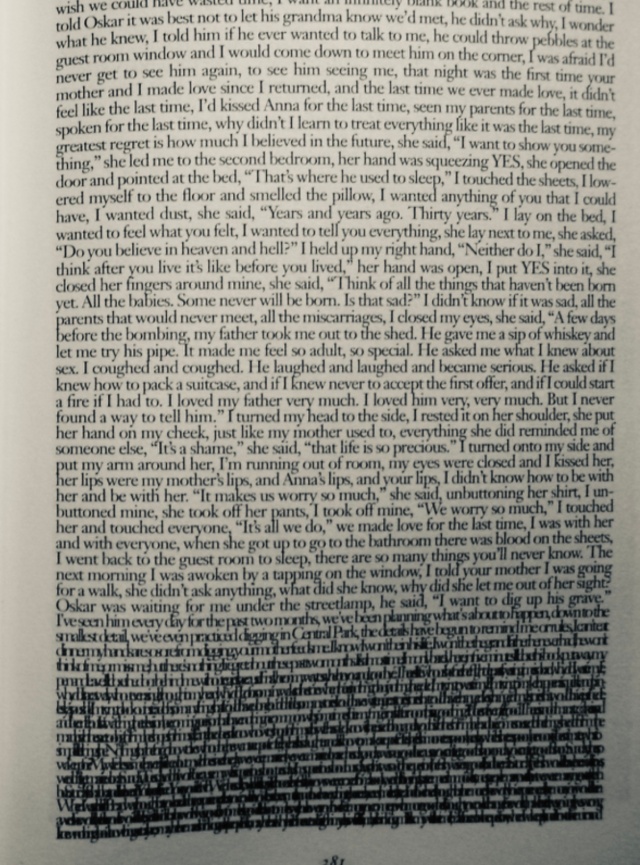 Turn the page, and the chapter ends in an all-black burial of urgent and unintelligible lines shared too late.

Simply put, he ran out of time.

We must strive harder to write and publish more, to strike a stronger balance between the two, so we are not so urgent to say what needs to be said, when we run out of space on the very mortal and terminal place at the end of our chapter.

One comment on “The Fragile Balance between Writing and Publishing”